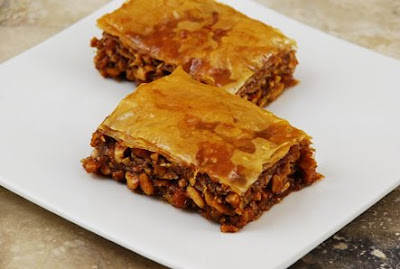 Today's posting for Greek Week has everyone we know in a total uproar. They can't believe that we actually made it because everyone thinks it is so difficult to do, when in reality this had to have been one of the easiest dishes we have ever done. Everyone we have given samples too have simply fell in love with this dish. We keep hearing how wonderful it is and how it is the best they have ever had. The making of this dish was by request from my friend Nicole, according to her I hit the nail on the head with this dish and it was perfect. My husband took some to a friend of his who is Greek, and according to him, he loves ours better than the traditional, and his wife was amazed on how good it was that she wants this recipe.

Toss together the cinnamon and chopped nuts in a bowl. Unroll the phyllo and cover with a damp paper towel to keep it from drying out. In a buttered 13x9 baking pan place 2 sheets of phyllo down, brush generously with butter. Sprinkle 3 Tbs. Of the nut mix over the top of the phyllo, repeat layers until all of the nuts have been used. On top of the last layer of nuts place 6 sheets of phyllo and generously brush with butter. Using a sharp knife cut the Baklava ( all the way to the bottom ) into 4 long rows, then cut across width way to make the size bar you would like. In a preheated 350 degree oven cook the Baklava for 50 minutes, or until golden and crisp. While the Baklava is baking, combine sugar & water in a small sauce pan over medium heat and bring to a boil. Stir in the honey, vanilla and lemon zest, reduce heat and simmer for 20-30 minutes. When the Baklava is done remove from the oven and immediately spoon the syrup over the entire dessert Let cool completely before serving.

Wow! Baklava! I had my first baklava when I was in Turkey :)

This baklava looks so yummy...

I love Baklava and always assumed it would be much more difficult to make. Thanks for sharing!

Oh, I LOVE this simple version, honey roasted nuts are my favorite. I have put this on my list to make. SO SO delicious Mary Beth!

I love baklava but have never attempted to make it myself! Great job!

Baklava is a big favorite with my family but I've never tried to make it. Always assumed it was difficult and very time consuming. Your version looks truly heavenly.

I love baklava. It's one of my favorite desserts. I'm think I'm craving some now!

Wow...I haven't had baklava for some time and when I saw this recipe, I said, "I can do that!" So I will give it a try. Thanks for sharing this!

I made baklava once and had so much fun! Your delicious looking post makes me want to make it again.

A wonderful recipe for baklava - it looks heavenly and I would so love a piece!

I've always wanted to make this but was too intimidated. I may try this now, you have me sold.

count me among the folks who love baklava almost more than life itself. it's the perfect dessert--sweet, crunchy, nutty, and crispy. what more could you ask for?

Wow nice to hear you had such rave reviews! It really looks perfect :)

I've never made this before, I need to put this on my list of things to make! Very nice!

I love you for posting this! My hubs can't usually eat baklava becaue of the walnuts or pecans, but now i can just make this recipe! Thank you!

Baklava is one of my all time favourites. Yours looks great!

This looks and sounds amazing! Baklava is a favorite treat but something that I always thought I'd have to buy. Thanks for this great recipe!

Thanks for the Baklava recipe. We had that sometime late last year at a Bulgarian restaurant. May be I could try the recipe that you have here with some tweaks due to the lack of certain ingredients.

I've had baklava once and since then I've been wanting to make my own! I love your recipe and the ingredients you used :)

I love, love, love Baklava, but have never had the courage to try making it for myself. Now I think I'll give it a try with your recipe!!

I do love Baklava but haven't made it in so long. It does seem daunting but then again with all of those luscious ingredients could you really go wrong? Thanks for reminding me of this sweet favorite!

I love baklava! My only problem is that I can't leave it be after I get it around me! Looks delicious!

My mouth is watering just looking at these! I was looking for a dessert to make this weekend and I think I am going to have to make this Baklava :)

That is on the picture not a baklava. It is just a desert with nuts. If you want to know what the real baklava is you need to take a vacation to Turkey.